– Gold was higher in all currencies in 2022 and outperformed stocks, bonds, crypto and bitcoin in a significant way as investors fled risk assets and again sought shelter in gold and silver bullion.

Asset Performance – Full Year 2022 – Source: Finviz
– Gold and silver again acted like safe haven assets in another very turbulent year. Stocks fell very sharply with the S&P 500 down 19% and the NASDAQ 100 down 32.8% (see table above).

– “Risk free” and benchmark US government debt saw very sharp falls and the US 30 year and 10 year fell very sharply – losing 22.2% and 14% in value respectively (see table above). Concerns about the vulnerable US economy, very poor governance and massive US government debt are set to increase in the coming months which will likely see further losses for bonds.

– U.S. government bonds had an “annus horribilis” and it was the worst year for bonds in more than 50 years & 6th worst returns since 1700 (see table below). Governments including the U.S. government are essentially bankrupt and central banks including the Federal Reserve are devaluing & debasing all major currencies.

– Central banks are now nervous to buy and hold US and other government debt and or instead increasingly diversifying into gold bullion to protect and hedge their foreign exchange reserves. Central banks globally have accumulated gold reserves this year at a pace never seen since 1967, when the US dollar was still backed by gold and before the end of the London Gold Pool.

“The last time this level of buying was seen marked a historical turning point for the global monetary system. In 1967, European central banks bought massive volumes of gold from the US, leading to a run on the price and the collapse of the London Gold Pool of reserves. That hastened the eventual demise of the Bretton Woods System that tied the value of the US dollar to the precious metal.” 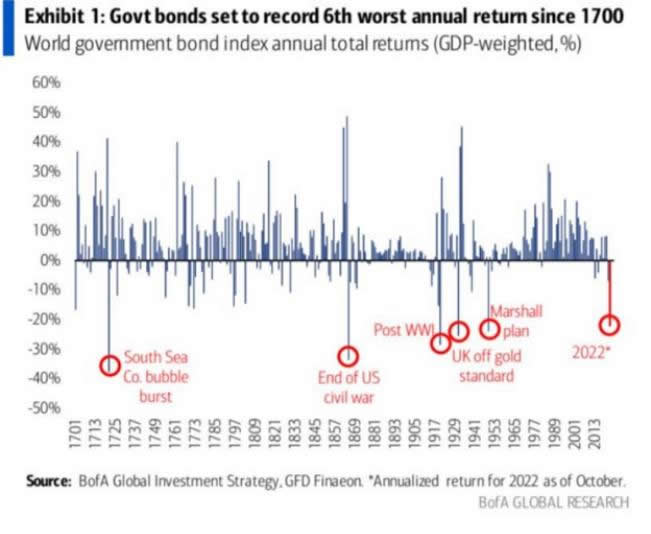 – Commodities which were undervalued surged in 2022 and the war in Ukraine and global tensions have contributed to the surging prices in energy and food commodities. Natural gas was 24% higher while oil (NYMEX WTI) was only 5% higher. This has contributed to inflation and this inflation looks intractable especially as we are due a period of dollar weakness.

– “Digital gold” bitcoin collapsed 64% in 2022, clearly showing that it is not a safe haven asset or indeed a currency. Other cryptos were down by more with some going to zero as the crypto sector experienced mass liquidations by nervous speculators realising they owned “fool’s gold”.

– Every asset class except for gold, silver, platinum and certain commodities finished deep in the red as a “perfect storm” of surging inflation, slowing global growth, an energy crisis, a food crisis, deepening supply-chain challenges, war and the risk of a World War badly impacted risk assets.

– Gold and silver bullion once again demonstrated their long term safe haven benefits to investors exactly when they needed a hedge and safe haven asset.

– Since 2000, gold has frequently fallen briefly at the start of bear markets in stocks and when there have been global crisis such as those seen after the ‘911’ attacks, the collapse of Lehman Brothers and the EU debt crisis. Gold tends to be somewhat correlated with risk assets in the very short term but soon after decouples and makes strong gains while risk assets fall further or enter bear markets.

– We expect gold’s recent outperformance to continue in 2023 and in the next few years as it resumes its secular bull market and stocks and bonds enter secular bear markets.

– The dollar strength seen in 2022 is unlikely to continue into 2023 and 2024 and dollar weakness should contribute to further gains for precious metals.

– Markets are likely to have a roller coaster ride of uncertainty and volatility in 2023, making the case for owning bullion coins and bars even more compelling.

– There have been forecasts that gold could rise as high as $4,000/oz in 2023. Gold prices could surge to $4,000 an ounce in 2023 as recession fears persist and as many economies could face recessions in the first quarter, which would lead to many central banks slowing their pace of interest rate hikes and make gold instantly more attractive, respected analyst Juerg Kiener, MD of Swiss Asia Capital told CNBC.

Were gold to more than double in value in the coming months, I would expect silver to see even greater gains and to surge to levels between $50/oz and $100/oz.

– Conclusion: People should be taking advantage of this valuable time to prepare
We are in the ‘calm before the storm’ with a still relatively low gold and silver price. This uncertainty and instability is not going to go away any time soon. Indeed, the plans for central bank digital currencies (CBDCs) are highlighting the benefits of owning gold and silver coins both as stores of value but also as decentralised forms of money in the event of stagflation, hyperinflation or the forced introduction of “Orwellian” fiat, digital, control currencies.

– As ever, it is best to hope for the best but be financially, materially and psychologically prepared for less benign scenarios by becoming less dependent on government, banks and our digital systems by owning gold and silver bullion in the safest ways possible.

Americans Continue to Pay for Inflation With Credit Cards