The Housing Market Appears To Be In Free Fall

The following is an excerpt from the latest issue of the Short Seller’s Journal.  I have been hitting doubles, triples and home runs with my housing market-related stock shorts, like $OPEN, $HOUS, $Z, $PSA, $REZ plus homebuilder stocks. You can learn more about this weekly newsletter here:  Short Seller’s Journal information.

Housing market update – The Homebuyer Affordability Fixed Mortgage Index from the National Association of Realtors has plunged to its lowest level since 1989:

The late 1980’s experienced what was back then considered a housing bubble, though it was much smaller in scale than the two housing bubbles this century. But here’s the kicker: back then the average rate for a 30-yr fixed-rate agency mortgage was nearly 10%. Price inflation and deteriorating household conditions has turbo-charged the prospective homebuyer’s sensitivity to small changes in interest rates relative to 33 years ago.

This explains why the July new home sales report was a complete disaster. The headline SAAR (seasonally adjusted annualized rate) was down 12.6% from June. The SAAR of 511k homes sold was below Wall Street’s forecast of 520k. The YoY SAAR plunged 29.6% and the rate of home sales is at its lowest since January 2016.

However, the YoY unadjusted monthly sales showed July new home sales collapsed 32.2% from July 2021. The unadjusted number is much “cleaner” statistically than the SAAR, as it is not subjected to seasonal adjustment modeling errors – only to data collection estimation errors. The months’ supply jumped from 9.1 months in June to 11.2 months in July. This chart should terrify anyone who recently overpaid for a new home or was thinking about buying one: 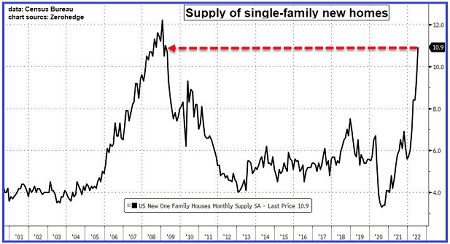 The supply of new homes is nearly as high as it was at its highest after the previous housing bubble popped. The “low inventory” narrative was never completely valid but now it is preposterous.

In a recent issue, I mentioned that Wall Street/corporate home buyers have been rapidly pulling back from the housing market. This past week, Blackstone announced that its Home Partners of America buy-to-rent subsidiary will stop buying homes in 38 cities as of September 1st. It will stop buying in an additional 10 cities on October 1st. In addition to Blackstone, Invitation Homes (INVH), American Homes 4 Rent (AMH) and My Community Homes (owned by KKR) announced that they have slowed considerably their home purchases.

Up until recently, buy-to-rent or flip homebuyers represented well over 20% of all home sales over the last couple of years. Zillow (Z) shut down its home flipping operations in late 2021. It’s only a matter of time before Opendoor (OPEN) stops buying homes. One of the differences between the 2008 bubble and current bubble is that the corporate buyers largely were not prevalent until after the 2008 bubble had collapsed. However, the corporate home buyers were one of the primary drivers of the housing bubble. Removing the corporate demand from the market equation will accelerate the downward momentum of the market and it’s one of the reasons I believe this housing collapse will be worse than 2008.

The chart below makes a compelling argument that home prices are going to go into free fall: 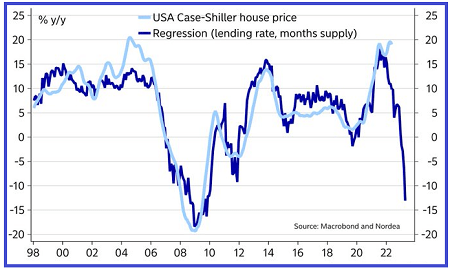 The light blue line is the Case-Shiller average home price. The dark blue line is a regression metric composed of the current mortgage rate and months supply. The two lines are highly correlated going back to 1998, the start date of the study. I do not foresee a scenario which prevents the light blue line from “catching down” quickly with the dark blue line. The 60% decline YoY new orders in its FY Q3 reported by TOL (see below) is an indicator that a price collapse is coming.

This chart solidifies that argument: 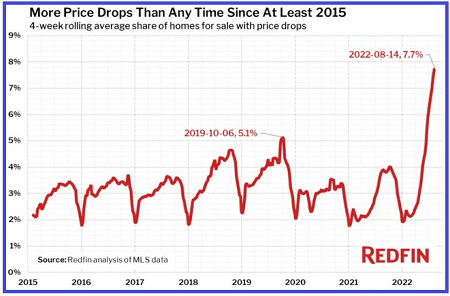 A long-time colleague of mine knows the CEO of a large excavating company in Colorado. They primarily do “dirt work” for new homebuilders. They are busy finishing existing projects. However, they do not have any new business on the books for 2023 or 2024. The CEO said “it’s like somebody just turned off the fountain.” If the Fed sticks to the message delivered by Jay Powell at Jackson Hole on Friday just for the next four to six months, the carnage to the housing market will be Biblical.

The Most Splendid Housing Bubbles in America, August Update: First Price Drops Appear, All in the West

The Most Splendid Housing Bubbles in America, August Update: First Price Drops Appear, All in the West

The Calm Before the Storm: SchiffGold Friday Gold Wrap Sept. 9, 2022