Used vehicle retail prices skyrocketed from August 2020 through December 2021. The “average listing price,” tracked by Cox Automotive, was up by a mind-blowing 41% over that 17-month period. The Consumer Price Index for used vehicles, which is seasonally adjusted, maxed out a month later, in January 2022, due to seasonal adjustments, up by 53% over the 18-month period. 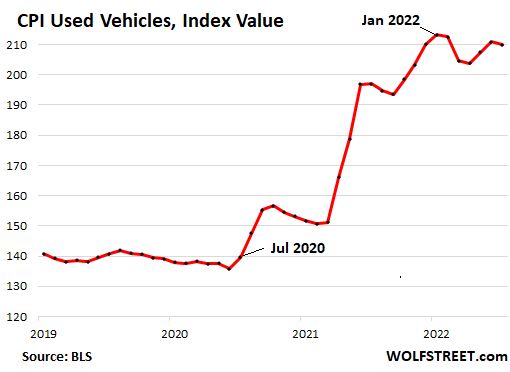 So the mind-boggling used-vehicle price spike ended in January. But the influx of used vehicle from rental fleets into the used vehicle market – usually 2-3 million vehicles per year – continues to be constrained as rental fleets are having trouble getting new vehicles in sufficient quantity due to the ongoing production shortfalls by automakers. And they’re hanging on to their vehicles longer.

Inventory in used vehicles is adequate for the lower sales levels. And sales are down because buyers are balking at the still crazy-high prices, but dealers don’t want to cut their prices to boost sales because they’re facing limited supply. So the market is hobbling along with still sky-high prices, lower sales, frustrated potential buyers, and tight inventories.

But within the market, there’s a big divergence.

A study by used-vehicle search engine iSeeCars.com found that prices of used vehicles with internal combustion engines (ICE), which make up the vast majority of the used vehicle market, trended flat to lower this year roughly in line with the “average listing price” and the CPI for used vehicles.

But prices of used EVs – battery EVs only, not hybrids – after following the trajectory of ICE vehicles earlier in the year, surged again since March amid strong demand from buyers, and very little supply since EVs are still just a minuscule portion of the used vehicle market, with now supply from rental companies as they’re just now starting to incorporate them into their fleets.

For this study, iSeeCars.com analyzed the listings of 13.8 million one-to-five-year-old used vehicles between January and July of 2021 and 2022, by model, and calculated the average listing price for each model and compared it to the average listing price of the same model a year earlier. It excluded low-volume models and models that went out of production by the 2022 model year. 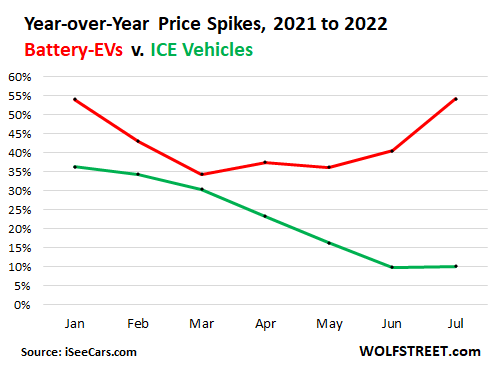 Some (ironic?) twists within this EV bunch.

Biggest year-over-year price spike: Nissan Leaf, which not too long ago was a dud in the used vehicle market. But the price took off, likely due to its relatively low price and “the heightened desirability for the redesigned 2018 model that offers increased range and is now coming off lease to enter the used car market,” according to the report. The average price jumped by 45%, or by $8,930, to $28,787.

Number 2 biggest year-over-year price spike: Chevrolet Bolt, which got a lot of bad publicity. But it’s the cheapest used EV out there, and gasoline is expensive, and “its relative affordability plus heightened interest in all-electric vehicles have led to its steep used car price increase,” the report said. The average price jumped by 29% or by $6,417 year-over-year, to $28,291.

Tesla models are in the middle of the pack in terms of percentage price increases, but given the huge red-hot price of used Teslas, those percentage increases make for big dollar increases.

The luxury imports – the Audi e-tron and the Jaguar I-Pace (made by contract manufacturer Magna Steyr in Austria) – have seen much smaller year-over-year price gains. And the Porsche Taycan has seen the only year-over-price decline among the EVs, but is also by far the most expensive model on this list (from biggest percentage gainers to smallest).

The craziness of used prices being higher than new, EV or ICE.

If you’re breathlessly looking at the right column above, the prices of used EVs… One of the most astounding aspects of the past 12-18 months is the crazy situation of many used-vehicle prices – EVs and ICE vehicles – being higher than prices of the same model as a new vehicle. Which is just nuts.

If there had been a solid buyers’ strike when used vehicle prices started going crazy in late 2020, none of this would have happened. Most people can just drive what they already have for a year or two, and if 70% of the buyers stop looking because prices are crazy, sales collapse, and prices come down, until they’ve fallen enough to where sales revive.

People did that during the Financial Crisis. It worked. It pushed GM and Chrysler into bankruptcy, along with much of the component industry. But this time around, people had all this pandemic cash and they went crazy with it, buy-buy-buy.

For prices to come down, people need to balk at these prices and not even shop for a used vehicle, and keep driving what they have, until some form of reason returns to this crazy market. And we’re seeing some balking now, but not nearly enough.

Art Laffer criticizes Biden’s economic policy as GDP drops in Q2: This is a ‘recipe for future inflation’

World at rising risk of recession as inflation hits consumers

Peter Schiff: We Can’t Postpone Inflation’s the Day of Reckoning Much Longer