Silver has started to turn around in the last week, rising over 4% and trading at approximately $20.3 per troy ounce at the time of writing. These gains come after weeks of the precious metal struggling and dipping to the $18 per troy ounce range.

Although silver usually tracks gold’s footsteps, currently, it is seeing far more gains than gold, which is up only about 2.3% this week. This is largely driven by falling silver inventories as well as the fact that, even when increasing, silver is still far cheaper than gold. Hence, with recessionary fears looming, and investors rushing towards safe haven assets, silver is the more affordable choice.

Could a stronger dollar put a cap on silver? 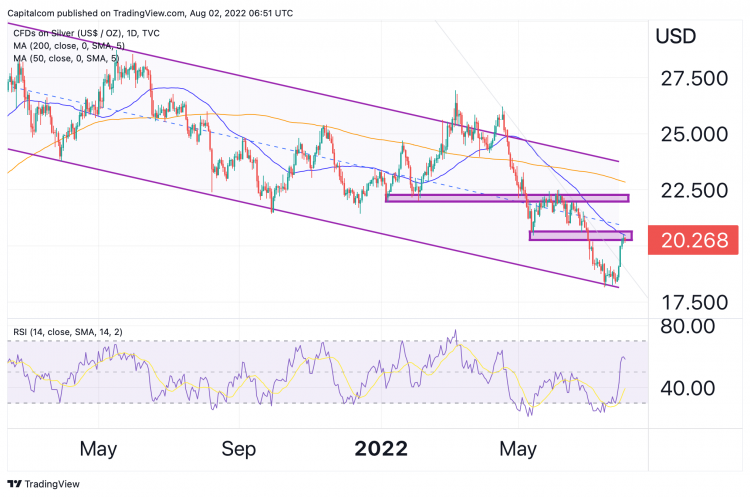 Why is the silver price rallying right now?

The London Bullion Market Association (LBMA)’s silver vault stocks have fallen to a six-year low this June at about 997 million troy ounces of silver, a sharp 15.5% fall from last June, when inventories were about 1.18 billion troy ounces.

This has been the result of a steady decline over the past 7 months or so, with silver inventories having dropped about 14.8% since November 2021, but has gone mostly unnoticed with most investor attention being focused on gold so far. With this decline in stocks, silver prices have consequently shot up.

A key part of this issue is that most of the silver held in the LBMA vaults are by silver ETFs such as iShares Silver Trust (SLV) and Wisdomtree Physical Silver (WGRO), with the actual amount of physical silver was only about 11,601 tonnes, only about 37% of the total vault amount.

Out of this, a large proportion is held by family offices, high net worth individuals and investment institutions, which further reduces the amount of actual silver available for sale. This leads to silver squeezes, such as the one in February 2021, when ETFs accounted for about 85% of the total silver stored in LBMA vaults.

With a similar situation unfolding at the moment, as well, silver prices are soaring as investors and manufacturers alike worry about not being able to get their hands on adequate supplies. A tightening monetary policy by the US Federal Reserve, as well as increased recessionary fears and slowing economic growth have also driven more safe haven demand to silver, which in turn, have pushed prices up.

Which are the main silver players impacted?

Fresnillio (FRES), one of the biggest mining giants, with a considerable interest in silver, has seen share prices rise by over 15% in the last few days. This was also supported by the company production still being in line with forecasts, with its quarterly production increasing as well.

Pan American Silver Corporation (PAAS) has also increased almost 14% in the past week, along with Wheaton Precious Metals (WPM), which has risen about 8.5% in the last week. The latter has also recently signed a sustainability-linked revolving credit facility deal worth about $2 billion, which has gone a long way in reassuring investors of good times ahead.

Rising silver prices may also convince other big miners, such as Rio Tinto (RIOgb), traditionally more focused on copper and gold, with a relatively small silver side, to ramp up their silver operations.

What is the silver outlook for the rest of 2022?

According to Capital.com analyst, David Jones, “ Silver is approaching an important area of technical resistance in the $20.5-20.6 zone, that encompasses the 50-day moving average (dma), which has been trading above the metal’s prices for more than three months.

What is your sentiment on Silver?

Give Silver a try

This was also the support area in May, which was then broken down in late June, resulting in a rapid selloff.The significant rebound from the lower line of the major descending channel indicates a positive short-term price momentum for silver, with the RSI breaking above 50 for the first time since April 20th.

An overshoot above $20.7, and then above the psychological level of $21, would provide the bulls with additional confidence. Then, $22-22.3 (May/June resistance & February-April support) provides an important resistance area, where some stronger seller pressure could appear.

However, as long as prices do not decisively exceed the 200-dma at $22.9 and then the top line of the descending channel at $23.7, the overall picture remains bearish. Looking ahead, silver’s correlation with safe-haven gold is a positive catalyst, while if the Fed signals further monetary tightening that could keep silver’s prices fairly low for long.”

On the upside, silver is also currently being used more as a portfolio diversifier since the beginning of the Russia-Ukraine conflict. This trend is likely to continue in the coming months as well and will most likely drive more silver demand, pushing up prices somewhat.

Other than that, silver is also used in several green technologies, such as electric vehicles (EVs) as well as solar panels, which are expected to continue to recover this year, which will further drive the precious metal’s demand.

Not that we’re gold bugs and yet……

Not that we’re gold bugs and yet……