by admin
in Gold Mining

Toronto, Ontario–(Newsfile Corp. – July 6, 2022) – IAMGOLD Corporation (NYSE: IAG) (TSX: IMG) (“IAMGOLD” or the “Company“) is pleased to announce assay results from its 2022 delineation diamond drilling program on its wholly-owned Karita Gold project in north-eastern Guinea. The project is located along the prolific Senegal-Mali Shear Zone in West Africa, between the Company’s Boto Gold Project in Senegal eight (8) kilometres to the north, and its Diakha-Siribaya Gold project in Mali three (3) kilometres to the south.

Highlights include (refer to Table 1 for detailed interval results):

Craig MacDougall, Executive Vice President, Growth for IAMGOLD, stated: “The results reported today from our ongoing delineation drilling program are highly encouraging and continue to build on our exploration successes in the region. Karita is located on the Senegal-Mali Shear Zone which extends from B2Gold’s Fekola mine 15 kilometres to the north though our previous discoveries at the Boto and Diakha-Siribaya projects to the south. During this program we have intersected multiple, wide zones of mineralization within altered metasedimentary units, several of which include considerable thickness in the shallow oxidized zone, extending nearly 2 kilometres along strike. We would like to recognize the efforts of our exploration team in West Africa, who have worked tirelessly against many logistical challenges to safely implement this drilling program as they advance our evaluation of our newest discovery.”

The assay results returned represent 42 diamond drill holes (“DDH”) totaling 10,230.5 metres from the ongoing 2022 delineation drilling program, which will involve the completion of 22,000 to 24,000 metres of drilling, designed to delineate the mineralized zones on a nominal 100 x 50 metre collar spacing in order to support a future initial mineral resource estimate. To date, approximately 18,225 metres in 70 DDH holes have been completed. Additional assay results will be reported once they are received, validated and compiled. 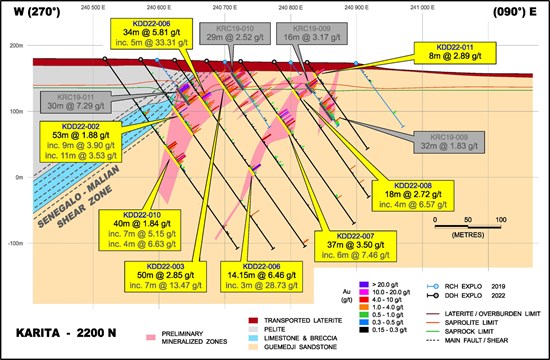 Note: Drill hole intercepts are calculated with a lower cut-off grade of 0.3 g/t Au and may contain lower grade intervals of
up to 5 meters in core length

Approximately 4,000 to 6,000 metres of additional drilling is planned in the second half of the year as part of the 2022 delineation drilling program. The results of the drilling program will be compiled, validated and interpreted to develop a deposit model to support the completion of an initial mineral resource estimate planned for 2023.

The Karita Gold project is wholly-owned by IAMGOLD and is held under an exploration permit that covers approximately 100 square kilometres in Guinea, on the Birimian aged Kédougou-Kéniéba inlier of the West African Craton region along the borders with Senegal, Guinea and Mali.

In 2017, the Company completed a reconnaissance geology and termite mound geochemical sampling program over the Karita permit to evaluate the interpreted extension of the Boto-Diakha mineralized trend in Guinea. The area is thought to cover an extension of the regionally important and prolific Senegal-Mali Shear Zone along trend between IAMGOLD’s Boto Gold deposits in Senegal to the north, and its Diakha deposit on the Siribaya project in Mali to the south. The sampling program identified an extensive gold geochemical anomaly delineated over a nearly 2 kilometre strike length, and similar to that observed to be associated with the deposits occurring at both Boto and Diakha. 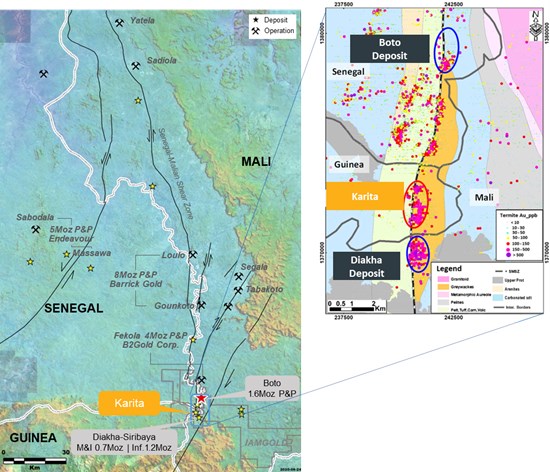 The initial 2019 drilling program was designed to evaluate the geochemical anomaly for the presence of mineralization and involved the completion of wide spaced lines of reverse circulation (“RC”) drilling, which confirmed the presence of multiple zones of mineralization hosted within an albite + hematite altered sandstone metasedimentary unit over a 1.6 kilometre strike length.

After extensive access restrictions arising from the global COVID-19 pandemic, exploration resumed in 2022 with the objective of delineating this new discovery to evaluate its resource potential. Results to date have confirmed the presence of shallow oxide mineralization extending at depth to fresh rock where mineralization is observed to be hosted in altered and locally brecciated metasedimentary lithologies exhibiting albite – silica – hematite alteration associated with disseminated to locally narrow semi-massive sulphide (pyrite) veins and occasional visible gold. Overall, the mineralization shows similarities to IAMGOLD’s Boto and Diakha deposits located along the same trend.

The drilling results contained in this news release have been prepared in accordance with National Instrument 43-101 – Standards of Disclosure for Mineral Projects (“NI 43-101”).

The information in this news release was reviewed and approved by Craig MacDougall, P.Geo, Executive Vice President, Growth for IAMGOLD. Mr. MacDougall is a QP for the purposes of NI 43-101. The technical information has been included herein with the consent and prior review of the above noted QPs.

The sampling of, and assay data from, DDH core are monitored through the implementation of a quality assurance – quality control (QA-QC) program designed to follow industry best practice and include the insertion of certified reference standards. Core samples from diamond drilling are collected from three diamond rigs, at generally one meter intervals, under the direct supervision of IAMGOLD geologists and field technicians. Core samples are sawed in half, with one half sent to the lab for prep and assay, and the other retained for reference purposes.

The assay samples were prepared and assayed at Bureau Veritas Analytical Laboratory in Bamako, using a standard fire assay with a 50-gram charge and an Atomic Absorption finish (FA450). Samples which returned values greater than 10 g/t Au are being re-assayed using a gravimetric finish.

This news release contains forward-looking statements. All statements, other than of historical fact, that address activities, events or developments that the Company believes, expects or anticipates will or may occur in the future are forward-looking statements. Forward-looking statements are generally identifiable by, but not limited to, the use of the words “may”, “will”, “should”, “would”, “continue”, “expect”, “expected”, “budget”, “forecast”, “anticipate”, “estimate”, “believe”, “intend”, “appear” “plan”, “schedule”, “guidance”, “outlook”, “potential”, “plans”, “targeted”, “focused”, or “project” or the negative of these words or other variations on these words or comparable terminology. Forward-looking statements are subject to a number of risks and uncertainties, many of which are beyond the Company’s ability to control or predict, that may cause the actual results to differ materially from those discussed in the forward-looking statements. Factors that could cause actual results or events to differ materially from current expectations include, but are not limited to, differences in the mineral content within the material identified as mineral resources or mineral reserves from that predicted, the failure to accurately estimate mineral resources or mineral reserves, unexpected increases in capital expenditures, operating expenditures and exploration expenditures, changes in development or mining plans due to changes in logistical, technical or other factors, the possibility that future exploration results will not be consistent with the Company’s expectations, changes in world gold markets and other risks disclosed in IAMGOLD’s most recent Form 40-F/Annual Information Form on file with the United States Securities and Exchange Commission at www.sec.gov/edgar.shtml and Canadian securities regulatory authorities at www.sedar.com, which are incorporated herein. Any forward-looking statement speaks only as of the date on which it is made and, except as may be required by applicable securities laws, the Company disclaims any intent or obligation to update any forward-looking statement. The Company disclaims any intention or obligation to update or revise any forward-looking statements whether as a result of new information, future events or otherwise except as required by applicable law.

References to mineral resources contained in this news release are based on the meaning given to such term in NI 43-101 and the Canadian Institute of Mining, Metallurgy and Petroleum (“CIM”) – CIM Definition Standards on Mineral Resources and Mineral Reserves, adopted by the CIM Council, as amended (the “CIM Standards”). These standards are similar to those used by the United States Securities and Exchange Commission (the “SEC”) Industry Guide No. 7, as interpreted by the SEC staff. However, the definitions in NI 43-101 and the CIM Standards differ in certain respects from those under Industry Guide 7. Accordingly, mineral resource information contained in this news release may not be comparable to similar information disclosed by United States companies.

As a result of the adoption of amendments to the SEC’s disclosure rules (the “SEC Modernization Rules”), which more closely align its disclosure requirements and policies for mining properties with current industry and global regulatory practices and standards, including NI 43-101 and the CIM Standards, and which became effective on February 25, 2019, the SEC now recognizes estimates of “measured mineral resources”, “indicated mineral resources” and “inferred mineral resources.” Issuers were required to comply with the SEC Modernization Rules in their first fiscal year beginning on or after January 1, 2021, though Canadian issuers that report in the United States using the Multijurisdictional Disclosure System (“MJDS”) may still use NI 43-101 rather than the SEC Modernization Rules when using the SEC’s MJDS registration statement and annual report forms.

IAMGOLD is a mid-tier gold mining company operating in North America, South America and West Africa. The Company has three operating mines: Essakane (Burkina Faso), Rosebel (Suriname) and Westwood (Canada), and is building the large-scale, long life Côté Gold project (Canada) which is expected to start production towards the end of 2023. In addition, the Company has a robust development and exploration portfolio within high potential mining districts in the Americas and West Africa.

IAMGOLD employs approximately 5,000 people and is committed to maintaining its culture of accountable mining through high standards of Environmental, Social and Governance (“ESG”) practices, including its commitment to Zero Harm®, in every aspect of its business. IAMGOLD is listed on the New York Stock Exchange (NYSE: IAG) and the Toronto Stock Exchange (TSX: IMG) and is one of the companies on the Jantzi Social Index (“JSI”), a socially screened market capitalization-weighted consisting of companies which pass a set of broadly based environmental, social and governance rating criteria.

This entire news release may be accessed via e-mail, IAMGOLD’s website at www.iamgold.com and through Newsfile’s website at

. All material information on IAMGOLD can be found at

To view the source version of this press release, please visit https://www.newsfilecorp.com/release/130082

Secrets of the Fed | Today’s top gold news and opinion